There are so many theories about TDS is drinking water, but who knows what it actually means?

So, to break it down after some research.

I have included some excerpts from the WHO and SA water guidelines below.

“The total dissolved solids (TDS) is a measure of the amount of various inorganic salts dissolved in water. The TDS concentration is directly proportional to the electrical conductivity (EC) of water. Since EC is much easier to measure than TDS, it is routinely used as an estimate of the TDS concentration. Electrical conductivity (EC) is a measure of the ability of water to conduct an electrical current. This ability is a result of the presence of ions in water such as carbonate, bicarbonate, chloride, sulphate, nitrate, sodium, potassium, calcium and magnesium, all of which carry an electrical charge. Most organic compounds dissolved in water do not dissociate into ions, consequently they do not affect the EC.”

What does the WHO say about TDS in drinking water:

“Total dissolved solids The palatability of water with a total dissolved solids (TDS) level of less than about 600 mg/l is generally considered to be good; drinking-water becomes significantly and increasingly unpalatable at TDS levels greater than about 1000 mg/l. The presence of high levels of TDS may also be objectionable to consumers, owing to excessive scaling in water pipes, heaters, boilers and household appliances. No health-based guideline value for TDS has been proposed…”

* View the WHO drinking water guidelines

What about the South African water quality guidelines? 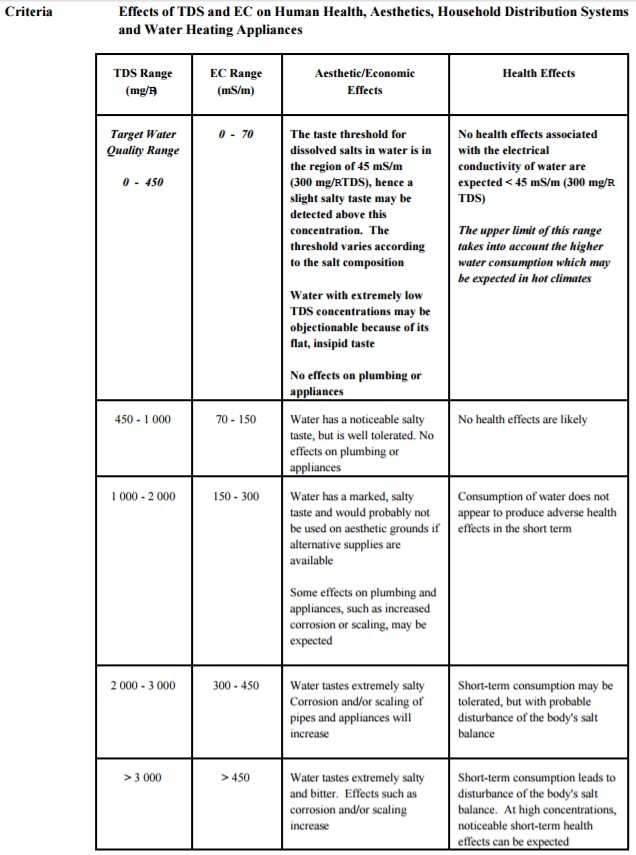 *** “In one litre of Joburg water, there is typically 18 milligrams of calcium….total dissolved solids 150… This complies fully with SANS 241 Ed 6.1, Class 1 Drinking Water.”