4. Low in Calories and Can Help Reduce Cravings

Based on research, some of kimchi’s benefits may include:

Kimchi is like a cousin to sauerkraut and the Korean take on cultured veggies. Kimchi is a traditional fermented probiotic food that is a staple Korean side dish.

Why is Kimchi Beneficial?

Kimchi undergoes a traditional fermentation process during which the flavours, textures and health benefits of kimchi dramatically change and improve, which is why kimchi is now growing in popularity worldwide as a “superfood.”

In a 2014 report published in the Journal of Medicinal Foods, the fermentative byproducts formed during fermentation and the functional ingredients used to make kimchi significantly boost its benefits as these are responsible for the forming of probiotics.

The WHO (World Health Organization) defines probiotics as “live organisms which when administered in adequate amounts confer a health benefit on the host.” The organic acids called lactobacilli and lactic acid are the primary types of probiotics produced during its fermentation. These probiotics are known to suppress harmful bacteria and stimulate beneficial bacteria, prevent constipation, clean the intestines & even prevent colon cancer.

Based on research, some of kimchi’s benefits may include: 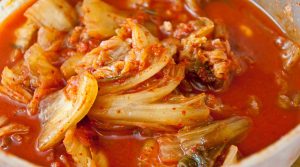 Beginning in the early 20th century, health researchers startd speculating that probiotic foods contained proteolytic microbes that worked in the colon to reduce toxic substances responsible for the aging process. They theorized that the consumption of fermented foods coats the colon with LAB bacteria, decreasing intestinal pH, suppressing dangerous bacteria and leading to a slower rate of aging. Since then, numerous studies suggest this to be true of many different cultured foods.

This superfood has even been associated with lower rates of obesity in Korea and helps keep Koreans energized, which is one reason they are known to be such a hard-working nation!